Enjoy an Excerpt from A Rogue Santa 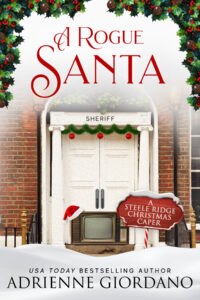 “We have another one, Sheriff.”

Maggie Kingston sat back in her desk chair and stared through the open doorway. On the wall outside her office hung a hand-drawn rendition of Steele Ridge one of the residents had donated.

The drawing’s location, chosen by Maggie, was a gentle reminder of her responsibilities. Not that she needed one. The townspeople gave her daily doses, but when seated at her desk, if the door was open—as it normally was—she had a perfect, miniature view of Steele Ridge.

“Shari,” she hollered back to her assistant, who was seated down the hall at her desk near the building entrance, “are you messing with me?”

Every now and again her assistant liked to do that. Just to needle her and lighten things up.

“No, ma’am. And would you look at this? We have a superstar coming through our front door.”

By now, Maggie knew every nuance of his voice and it never failed to get her hormones raging. Lord, the man was a stud.

“Shari,” Maggie called again. “His ego is big enough. Let’s not encourage him.”

The love of her life, otherwise known as Jayson Tucker, all blue-eyed superstar quarterback, appeared in her doorway. He wore a baseball cap covering his short blond hair, a white long-sleeved T-shirt just tight enough to show off the slamming bod underneath and track pants that cost more than her entire uniform. One of his big hands—she loved those hands—was splayed across his chest.

“How you wound me,” he cracked.

Maggie rolled her eyes. “Somehow, I think you’ll survive.” She pointed to the clock on her wall: 7:29. “What are you doing here? I thought you had practice this morning.”

“Coach canceled. Gave us a day off. Wanna play hooky and grab breakfast?”

Now that would be a treat. Having Jay playing for a North Carolina team sure had its perks. The primary one being he’d made a home right here in Steele Ridge.

And, technically, she wasn’t on the clock yet. Another thing Jay had brought to her life. Balance. Before him, she worked night and day paying no attention to time. Now? She had a life.

As much as a sheriff could anyway.

However, the lights on her desk phone were lit up like a Christmas tree. Three calls holding while Shari did her juggling act.

Attempting to focus on Jay, Maggie stood and walked toward him, intending to drop a quick kiss on his lips. When she got there though, like most times, that plan went to hell. Blame it on the male heat and broad-shouldered confidence that was so much a part of Jay because, well, the quick kiss turned into something else entirely.

Something that had her mind drifting to last night and this man buck naked under her.

And plenty of it.

His hand came around her, tugging her flush against him and she angled her head, deepening the kiss as his tongue danced inside her mouth and the hairs of his close-cut beard tickled her chin.

Every inch of her caught fire, her breasts tingling in anticipation of his hands all over them.

At least until he backed away and gave her his quirking, smart-ass grin. “Canoodling in the office from our straight-arrow sheriff? I’ve succeeded in taking you to the dark side.”

The dark side. Funny. She patted his rock-hard chest. “No one can see us. Plus, I’m trying to score points for when I tell you I can’t go to breakfast.”

By now, he understood her schedule. The lack of flexibility. The midnight calls. The long days. And God bless him because, given his own schedule and road trips and time spent away from Steele Ridge, he never hassled her, like some of her former boyfriends.

Maggie hustled around Jay and headed down the short hallway to Shari’s desk.

“Who the hell,” Jay said, following behind her, “gets their kicks by leaving ancient televisions on people’s porches? That’s just screwed up.”

Maggie cleared the bullpen area where her deputies’ desks sat and turned to face Jay. “Welcome to my world, babe. I’m sorry.”

He halted a foot from her. “No prob. I knew it was a long shot.”

Knowing how she felt about PDA in front of office staff, he gave her a quick nod and a squeeze on the arm. “I’ll see you later.”

As he walked out Maggie couldn’t help it. She checked out his butt.

Lord, those insanely expensive pants were worth every penny.

Her assistant punched a button. “I bet this is another one.”

More than likely. If the pattern stayed intact, half the homes on the block would have televisions—really old ones complete with dials—sitting on their porches. Some dingbat thought it entertaining.

After three nights of this nonsense, Maggie was unamused. So far, fifteen houses on four different streets had been hit and she didn’t have enough manpower to post an officer on every damned street to catch the guy.

Leaving Shari to deal with the complaints, Maggie went back to her office and grabbed her hat and car keys. She’d head on over to Barkley and check out the latest assortment for the recycling pile.

“Good news on this one,” Shari said when Maggie walked by, heading for the door.

“Mr. Elkins has one of those video doorbell thingies and it caught the guy.”

Video. Excellent. “Did he recognize the person?”

Despite missing out on breakfast with Jay, the day was looking up. “Ha! Got ‘em. Who is it?”

Her assistant, once again screwing with her. Maggie hit her with the I’m-the-boss look that typically alerted her staff she wasn’t in the mood for jokes. “Very funny.”

“I’m not kidding. It was literally a guy in a Santa suit.”

A fitness freak, Reid had been offering personal training to Jay since his first visit to town. He’d been on day two of an undeserved, bullshit scandal that got him released from the New York Knights. With his career spiraling, he’d rolled into town determined to lay low while Grif Steele, his agent, found him a job.

On that day, he’d met Maggie and then Reid, two people—along with Grif—

largely responsible for keeping him sane throughout the whole mess.

One thing about Reid, he knew how to work a man until he puked. Prick that he was, he took pleasure in it.

At thirty-seven, he needed his body in top shape if he intended to play football a few more years.

So, having nothing else to do after breakfast, Jay had wormed his way into Reid’s schedule for a workout and now climbed into his car with his muscles worn and aching.

After arriving home and showering, he decided his day off should include making Maggie her favorite dinner. Coming from a family of foodies, she did okay in the kitchen, but her schedule didn’t include extra hours for meal prep. During the season, his didn’t either. Today? Time to kill.

Which brought him back to town for a rib eye roast from the butcher and some fresh lunch meat.

Hands filled with Maggie’s canvas shopping totes, he made his way down the quiet sidewalk, baseball cap and sunglasses firmly in place. When he’d made Steele Ridge his home, the residents had taken him in, even helping to protect his privacy by sending reporters packing. Here, he was simply Jay, a guy who happened to be an athlete. No fuss, no constant autographing, no photos.

There was, however, the occasional tourist, so he typically wore a baseball cap and sunglasses in town. Just in case.

Bonnie Traughber, the lady from the post office, passed him going the opposite direction. She nodded and kept moving—thank you very much.

Next stop was the Mad Batter bakery where he paused in front to read the message of the day posted on the chalkboard sidewalk sign. Today’s inspiration, courtesy of comedian Billy Connolly, read: “Before you judge a man, walk a mile in his shoes. After that who cares?…He’s a mile away and you’ve got his shoes!”

After grabbing a couple of loaves of bread and some desserts for that night, he headed back to his Range Rover parked across from the sheriff’s station. Rather than deal with parking on Main Street, he liked this spot. It got him fresh air and a quiet walk and sometimes, if Maggie’s car was in the lot, he’d head inside just to lay eyes on her.

The sight of Maggie, no matter what was going on in his hectic career, settled him. Gave him a good dose of normalcy because Maggie didn’t give a shit about his star status.

For that alone, he loved her.

He took a quick look and spotted the Range Rover he’d bought her, plus her police cruiser. If he knew her at all, she probably hadn’t eaten lunch. She’d been known to forget about eating altogether, if she got busy, which made him nearly insane.

He couldn’t have that. Her eating habits were horrible. No schedule at all. Not only was it bad for her metabolism, he had a big night planned and she needed to keep her strength up.

A detour was definitely in order, so he waited for a passing car to go by and then headed across the street.

Inside, Shari sat at her desk pounding away on her computer keyboard. “Hey, Shari.”

She kept right on typing, but looked over at him. “Twice in one day? This is a treat.”

A minute later, he bypassed Maggie’s office and found the conference room door open with Maggie inside. She sat at the end of the table, elbow propped up and chin in hand while her free hand tapped at a mouse. Rather than startle her—never sneak up on a woman with a gun—he knocked once.

She slid her gaze to the door.

She pointed at her screen. “He’s wearing Tucks. Can you believe that? The bastard is taunting me.”

Tucks. The sneakers Grif had landed him a seriously sweet sponsorship deal for. What they had to do with whatever Maggie was looking at, he had nary a clue. “Who?”

“The idiot Santa with the televisions.”

Jay laughed and set his groceries on the table. “Babe, I doubt he’s taunting you. A few million people are wearing those shoes.”

Maggie locked her soulful brown eyes on him, hitting him with her you’re-irritating-me look.

She rocked back in her chair, stared up at the giant whiteboard she’d taped a map of Steele Ridge to. Jeez, he hadn’t seen an actual paper map in years.

Maggie pushed out of her chair. “I’m getting nowhere with this video. No identifying features at all. And, no, I didn’t eat.”

Excellent. Jay unloaded the lunch meat and bread and walked to the credenza where they kept a stash of silverware, plates, and leftover packets of mustard and mayo.

Maggie had recently instituted a glass-only rule in the office, making the local environmentalists happy, but the deputies weren’t too pleased with washing everything.

Jay set the plate, silverware, and condiments on the table and started assembling a sandwich. “What streets has he hit so far?”

“The most recent is Barkley.” She pointed to it on the map, then moved her finger to an adjacent street. “Before that was Oakton. And Deardon. They’re all close together. He’s ballsy, this Santa.”

She stepped back from the map, studied it a second. “Whoa.”

“I think I’ve got something.”