Enjoy an Excerpt from Relentless Pursuit 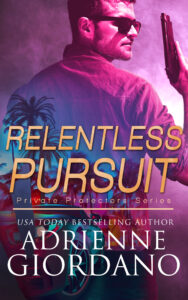 Billy Tripp nudged the nine-millimeter holstered under his suit jacket and decided this might be as good a time as any to meet his maker.

All he needed to do was slide that baby out, prop it under his chin and—bang—the misery would be over.

After all the death defying experiences he’d had, killing himself in a hotel ballroom would be sub-par. Supremely sub-par.

“Cheer up, jagweed,” Monk said, slapping him on the back.

“Why?” Billy glanced around the massive room at the sea of men and women dressed in sharp tuxedos and sexy, low cut gowns. As ballrooms went, Dante’s ranked in the top ten. Funky red walls and icicle chandeliers gave it a more contemporary feel, but it was still a ballroom. And he’d seen plenty of them.

“It could be worse. This job is almost complete.”

Billy scanned his immediate surroundings. “Yeah, but, dude, I’m guarding a necklace. There’s not even a body attached to it.”

Monk grinned. “You shouldn’t have let your passport expire.”

“First of all, I didn’t let my passport expire. It just happened. An accident.”

“You fucked up. Admit it.” And then Monk started humming.

Humming? Really? Of course Monk was in a good mood. He’d just returned from overseas where he played with guns and blew crap up. Billy had been scheduled to take the next two-month shift, but got caught up in this expired passport mess.

How had he, an ex-Army ranger working for one of the country’s most elite private security firms, forgotten to renew his fu—fudging passport?

And why the hell had he picked this month to promise his mother he would stop swearing? She’d asked him to do it and deserved his attention to the matter, that’s why.

Even if it was slowly destroying him.

A woman in her fifties wearing a monster low-cut black gown—that thing has no business on her body—wandered to the table and locked in on him. Cripes.

He glanced at Monk, who rolled his eyes and stepped away to check his phone. “It is.” Billy kept his focus on the room and any potential bad guys. The woman pressed a note into his hand. Great. Another one slipping him her number.

Ceasing conversation, he waited until the woman left and tucked the paper in his pocket with the other two. He’d get rid of them later. This routine, like most things, had lost its novelty long ago. Wasn’t that a travesty? Early on, he’d enjoyed the steady stream of attention that accompanied women throwing themselves at him. He was a guy. And guys liked to get laid. Pretty simple.

Except it got old. The strange women. The crazy, strange women who parked themselves on his doorstep or called him night and day. Hell, he never misled anyone about his intentions. He always told them what it was.

Not biting, Billy kept his gaze on the packed room. “Fu—fudge off. I could have had a new passport in a day or two, but Vic wanted to break my balls.”

“He’s teaching you a lesson. Next time, you won’t forget. Besides, we’ve been in a lot worse places than a fundraiser in South Beach. In December.”

Monk might as well take another hit off the crack pipe because he wasn’t getting it. “Every time I turn around, Vic is hauling me into his office. And he had to bring up that little infraction when you beat the crap out of me last summer. Christ sakes, you nearly kill me and I get in trouble? All because I was ragging on you?”

A couple in their twenties stepped up to the table and Monk nodded. “Evening.”

Billy stayed silent but shifted closer to the table. As ticked off as he was about this job, there would be no way he’d let that necklace disappear. Not on his watch. Soon he’d be out of here. Gone.

When the couple moved on, Monk turned back to him. “You’re not grasping the point of this assignment. This is punishment for being a grand fucking pain in the ass all the time.”

That was his theory? “Then why are you here? What are you being punished for?”

“I asked for it. I’d been gone two months, Izzy is on vacation for a couple of weeks and we’re doing a long weekend. I got no problems with this assignment.”

Yeah. There’s the difference. Billy turned his attention back to the ballroom. “You’re on vacation with your Victoria’s Secret model of a girlfriend and I’m in purgatory.”

A strawberry blonde, her thick hair falling in soft waves around her shoulders, stepped out of the crowd wearing a peach gown with a baggy, draping neckline, but the rest of it—humina, humina, humina—clung to her ample hips like snakeskin. “Whoa.”

She’d never be called skinny. Not with those hips and a rack that could give a man vertigo. But chunky didn’t suit either. Statuesque maybe. Hot, most definitely. Jeepers, he might be hearing angels singing over the orchestra. He elbowed Monk. “Check out this smoker coming our way.”

Monk swung his head in the sexy blonde’s direction. “That smoker is Kristen Dante. She runs this place. I met her when I got here yesterday.”

The boss? She couldn’t have been thirty years old. Billy let out a low whistle as Kristen Dante, her sumptuous body balancing on mile high heels, came closer. Damn, the woman had to be six foot in those shoes.

He nudged right up to the table. A woman like her could make a guy like him lose focus and he’d wind up with a missing million-dollar necklace.

In contrast to the body that made him want to reach out and touch, she had a face sent straight from heaven. Soft and round and sweet with dynamite green eyes. Amazing that she lived in Florida, because her fair skin would get crispy in the sun. Toss in the reddish-blond hair and Billy decided the whole fudging package worked. Big time.

The two of them shook hands and Hotness turned back to Billy. “We haven’t met, I’m Kristen. Welcome to Dante.”

Kristen stood with her hand extended waiting for him to say something. This was a big boy and, given her height, she didn’t get to look up at a man very often. Not to mention the Calvin Klein model good looks. He wore his collar-length, dark hair fashionably shaggy and his slick Italian suit fit his long body just fine, but he apparently hadn’t learned to speak. His sparkling blue eyes communicated their appraisal quite well, however, and she forced herself not to hunch. Her lifetime of weight issues didn’t permit comfort when people stared.

This man made an immediate impression though. With those eyes, she imagined he could get into all sorts of mischief. The pinging in her head warned she should run screaming. He had player tattooed all over him.

Peter, the man Vic Andrews called Monk, nudged his partner with his elbow, and the guy wandered back to Earth.

O-kay, then. She could only hope this guy had a bigger attention span than what he’d displayed introducing himself. Considering there was over ten million dollars worth of jewelry in this room.

She turned back to Peter. “Do you need anything?”

“No, ma’am. We’re fine. I’m doing the rounds and checking in with our men. All is quiet.”

Familiar slivers of unease curled around Kristen and she turned to see Mr. Mindsnap’s gaze plastered to her chest. Here we go. Yes, they’re real. Again, she focused on standing tall, but the effort drained her, forced her to concentrate on anything but her oversized body.

Peter cleared his throat and Billy flicked his attention back to the ballroom.

“We have men by the main doors and by each table,” Peter said. “We’re rotating every half hour. Were you expecting this big of a crowd?”

“We expected three-fifty, but we’re over four hundred. It’s a good cause and everyone loves to see millions in jewelry.” She pointed to the necklace propped on the stand. “This one will be auctioned tonight.”

Billy leaned forward and something in his twinkly eyes had her girly parts on full alert. Trouble.

But he was staring at her again, taking in her face and her hair, and the pressure of that hungry gaze forced her shoulders down. If only she could ball herself up to hide from the inspection. Did she have food on her face or something? Wouldn’t that be perfect? A fat Amazon with food stuck to her cheek.

Her assistant appeared next to her. “Sorry to interrupt. Can I see you a moment?”

If she didn’t already cherish Dee, this interruption would have sealed it. Anything to get out from under Billy Tripp’s eyes. “Absolutely. Excuse me, guys.”

Once Madame Hotness—M.H. as she would heretofore be known—left, Billy waggled his eyebrows at Monk, clutched his heart with both hands and gasped. “This could finally be the end. Tell my mother I love her.”

Monk cracked up. “What are you doing?”

“I see that. You were staring. She thinks you’re an asshole. I tend to agree. If you screw me on this assignment I’ll beat you worse than the last time. All I want is a quiet weekend with my girl.”

Kristen appeared again, her lips pinched. “Guys, I have…” She motioned to Billy’s hands still at his chest “Are you okay?”

Her gaze bounced between him and Monk before she finally shook her head. She held up the phone with her left hand. No wedding ring. Perfect.

“Something has come up in another part of the hotel. If you need me, call my cell.”

Oh, sweetheart, Billy thought, you’ve got yourself a deal.