Enjoy an Excerpt from Smoke Screen 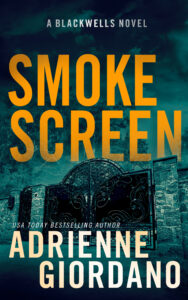 Phin stood smack in the middle of Kayla Krowne’s living room—the one inside her massive twelve-thousand square foot home—peering out over her small private beach and the still waters of Lake Norman.

He’d expected more boat traffic. Particularly with the streaks of purple and orange lighting up a summer sky. Who wouldn’t want to be floating around watching that spectacular sunset?

He supposed Tuesday nights in June weren’t big boating nights. He didn’t mind so much.

The entire scene gave him a sense of peace. And quiet.

At least on the lake.

Les Blakely, the senate majority leader from Charlotte, put his finger on Phin’s hot button and pressed that fucker hard enough to break it.

Phin dragged his gaze from the lake, looking down at Blakely, who—eh-hem—happened to be a good six inches shorter.

The senator shrugged a boney shoulder and… snorted.

Phin cocked his head and hit the guy with the flashing, toothy smile his brothers said caused men to shit themselves and women to lose their clothes. Either way, Phin had perfected it, learned to use it in a variety of ways.

A tool in his arsenal.

At times, like now, it kept him from pounding men like Les Blakely into the ground. And that was something because Phin still burned — a damned month later — about Blakely vaporizing a domestic violence bill that Kayla had lobbied hard for. Shelters around the country needed that funding and Blakely managed to bury the bill for probably another year.

“Asset recovery,” Blakely said. “Is that what we’re calling it these days?”

Phin focused on keeping his face neutral. No hard stare, no clenched jaw or pressed lips. He stood there, shoulders back, doing his Mr. Smooth thing, while a hot knife carved up his intestines.

“Gentlemen.” A hand clamped on Phin’s forearm, dragging him from the near-homicidal rage brewing inside him.

He glanced down at the hand squeezing his arm, then at its owner.

Kayla — thank you, sweet baby Jesus — stood beside him. He’d known her for years now and, as usual, her timing couldn’t be better.

A woman – an exceptionally noticeable one – with a mane of dark curly hair and deep blue eyes accompanied her. And who might this lovely creature be?

Maybe she was what Phin needed to relieve his now-pissy mood. Female company. Never a bad thing. Especially if it led to Phin’s hands rifling through those wild curls.

“It is,” Kayla agreed. “Senator, could I pull you from my good friend Phin? I have an important matter to discuss that requires a bit of privacy.”

Ha. Privacy his ass. Clearly, Kayla had overheard the exchange and wanted to keep Phin from getting blood on her marble floors.

As one of the country’s premier lobbyists, Kayla had power. Not the kind Blakely had. Hers was subtle. Back room influence where she’d wheel and deal senators and congress members on behalf of her clients.

A world Phin had left behind three years ago.

The weasel nodded. “Blackwell, good to see you.”

Not in this lifetime.

“Kayla,” Phin said, “maybe you can talk him into reviving that domestic violence bill.”

Kayla drilled him with a look that should have blown him clear through the floor-to-ceiling windows.

Tomorrow, she’d call him and ream him. Today? He’d gotten his jab in. After all, she couldn’t expect Phin to stand there and listen while the man insulted his family.

“Later,” she told Phin. “Now, I want to bend his ear about the appointment of our next Secretary of State.”

Oh, boy. Kayla ushered the senator away, leaving Phin thinking he’d like to be a fly on the wall for that conversation.

He banished thoughts of Blakely-the-weasel and flashed the smile again, offering his hand. “I’m Phin Blackwell.”

She accepted his hand, gave it a perfunctory shake. “I know.”

Interesting. This chick with her soulful blue eyes didn’t seem the panty dropping type. But, dang, that mane of curly hair combined with the black dress that managed to hug her body while revealing absolutely nothing made for a fascinating sexy-librarian package.

He made quick work of the handshake, making sure not to squeeze too hard or linger too long. He didn’t need those slime ball tactics. His mother had taught him better.

Inside though? His brain filled with visions of lowering that little side zipper on her dress and peeling it off.

He let the fantasy play out while his body hummed. Things might be looking up after the Blakely incident. “And you are?”

Phin ran through his mental contact list. Carmichael. If he knew Kayla at all, chances were she’d brought this woman to him for a reason. A reason that probably included a job.

And wasn’t that why Blackwell Asset Recovery Services — aka BARS — paid ten grand a plate to send him to these political shindigs?

“A pleasure, Maddy Carmichael,” Phin said. “Why do I feel like Kayla engineered this meeting?”

“Because she did. I need your help.”

A woman about his mom’s age — Congressman Jenkins’ wife — squeezed behind Phin, eyeing him with the hunger of a Bengal tiger.

The things he put up with for his job.

Ignoring the tiger, he focused on Maddy. “Always happy to oblige a woman in distress.”

At that, she rolled her eyes. Definitely not the panty dropping type.

Phin laughed. An honest to God ripple that flew right up his throat. How he loved a woman capable of verbal swordplay. “Is that why my friends call me CC for short?”

This time, Maddy laughed. “Good one. But this is serious.”

She leaned in. His cue to dip his head in anticipation of whatever apparently naughty secret she’d like to share. He had a few of his own, if she’d be willing to play.

“I’m the acquisitions manager at the Thompson Center,” she said, her breath warm on his neck.

“As in President Thompson?” he asked.

After two terms that ended three years ago, former United States President Gerald Thompson shook things up in Washington by foregoing a traditional presidential library. Instead, he’d opted to spend the twenty months before leaving office fundraising for a presidential center. One housing memorabilia, clothing he and his wife had worn, exhibits, a theatre. A gym to get kids off the street.

Thompson’s vision? To revive the Charlotte area he’d grown up in, but now suffered from the killer combo of economic decline and rising crime.

Phin cocked his head. His curiosity exciting him for reasons that suddenly had nothing to do with Maddy’s hair. “What can I help you with?”

Please let it be what I think it is.

“I’ll assume you’ve heard about the robbery at the Center?”

“Priceless jewels designed by a former president’s father? You bet I have.”

She leaned in again and he dipped his head, letting her get right next to his ear. “Can we talk in private?”