Enjoy an Excerpt from Enduring LOVE 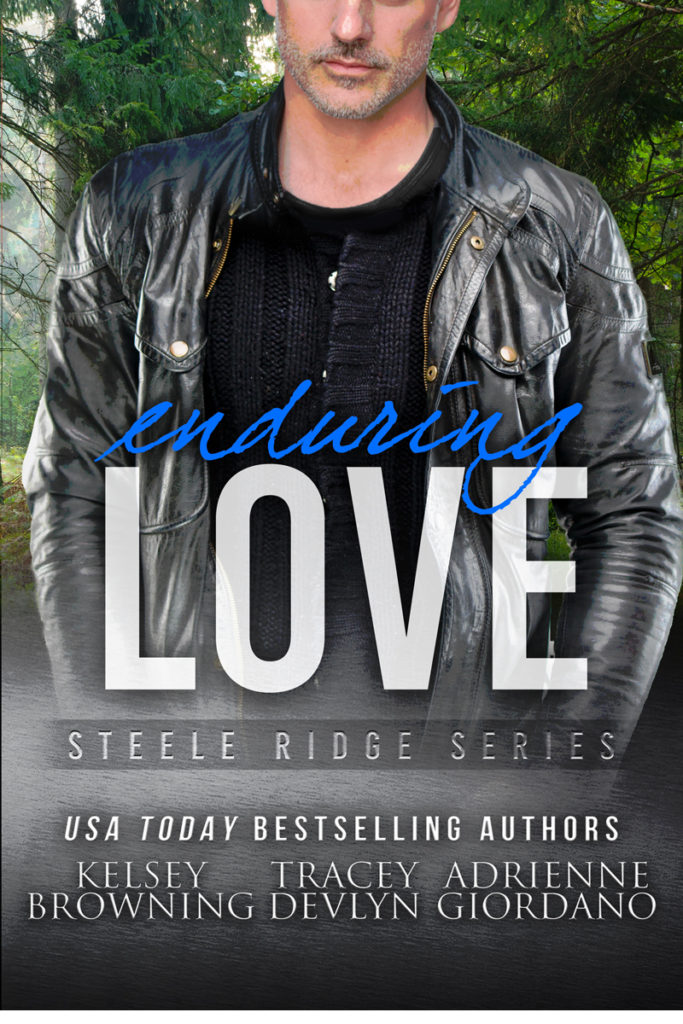 One thing Joan Steele knew about the past was that it never went away.

No matter how much she might want it to.

She stood in the center of an ancient motel room, its lime-green shag rug and floral bedspread making her wonder just how her path had led her to this place.

The past. It never went away.

The man who’d captured her heart hovered near the large front window, peeping through the curtains to the parking lot. He was here with her now, but if she faced the truth, she’d never completely have him. As much as she loved him, having him meant sharing with the past. With his devastating, soul-sucking demons. All of it held too much power over them.

Still, she couldn’t let him go.

She stepped closer and brushed a hand over his shoulder. “Bear, what’s wrong?”

He turned from the window and the haunting blue of his eyes reached her. “Someone’s out there. In a car.”

“It could be someone waiting for a guest.”

He mulled it over for a second, tilting his head one way, then the other, before checking the parking lot again.

“Nope. He’s getting out. I think I recognize him. I think it’s—”

Joan held up her hands. How many times had he thought he’d recognized someone only to have it turn out to be a random stranger? “Stop. Please. We don’t have a lot of time. If I’m not back by seven o’clock, Reid will send a search party. I love my boys, but I can’t make a move anymore without one of them hunting me down.”

Five years they’d been doing this. Meeting in this same motel, varying their schedules, switching rooms, doing whatever necessary to avoid being, as Bear put it, tailed.

Wouldn’t those boys of hers love that?

She scooped her purse off the dresser and hooked it over her shoulder. “I’m going home.”

His hand gripped her arm. “No. He’s coming toward the building.”

Of course he was. With Bear, there was always someone to be wary of. Joan shook her head. “I don’t care. Let him kill me.”

“Joanie, don’t even say that. I need to get you out of here.”

There was an idea she could get behind. “Then let’s go.”

“Well, sugar, there’s only one door in and out of this room so, yes, that’s the way.”

Still locked onto her arm, he dragged her toward the rear of the room. This man. God only knew what he had in mind.

“The window? Old man, now I know you have lost your mind.”

His voice held the cutting sharpness of irritation. Plus, he’d called her Joan and not his playful nickname of Joanie. Whatever rabbit hole he had jumped into, he’d done it with the full spiraling force of his protective instincts. His gaze shot to the door, then came back to her, as always, paralyzing her. From the first time she’d seen him, he’d done her in. Back then, between the contrast of his eyes and his jet-black hair coupled with carved cheeks that molded into a strong jaw, what was a woman to do? Throw in the sarcastic humor and a need to make the world right, and she’d fallen hard.

“Okay.” She squeezed his free hand. “Calm down. Please.”

“Seriously? You can’t wait until we get into town?” Britt Steele asked his brother, coasting into Motel Malibu’s parking lot.

Rather than maneuver Old Blue into a narrow space, Britt pulled up parallel to the building and threw his truck in park. “Didn’t realize you were a drama queen.”

Reid elbowed open the passenger door. “I’m not the one complaining about a two-minute pit stop.”

“Hurry up, princess.” Britt rested his wrist on the steering wheel and rapped his fingers on the dusty dashboard. After spending the day in Weaverville, all he wanted to do was get home, coax Randi into bed, and curl his naked body into hers.

But first, he had to get rid of his shithead brother.

A gray-haired gentleman sporting tat sleeves nodded at Reid on his way into the motel office. The guy stood a few inches shy of six foot and his biceps rivaled Reid’s, even though his brother had to be a good thirty years younger.

An image of his dad flitted through his mind. Eddy Steele might not be as broad and solid as Mr. Biceps, but he kept his body honed by hiking the mountains surrounding his cabin. Many times over the years, Britt wished his dad had spent less time in the wilderness and more time with his family. But the old man hadn’t, and he’d stopped crying about it when he was twelve years old.

A curse and hard rattle penetrated his thoughts, and Britt angled his head around to find Reid grasping the top of the vending machine and pulling it forward. The damn fool was going to splat himself if he wasn’t careful.

His attention wandered down the front of the one-story motel. Malibu wasn’t unlike any other cheap roadside inn. Though the façade wasn’t much to look at, rumor had it that the rooms were clean and the staff pleasant.

The lot in front of him was empty, save for a lone vehicle tucked around the corner of the building. Almost as if the driver wanted to hide his presence from passersby. If that was the case, he’d picked the perfect spot. Large shade trees provided a natural barrier between the lot and highway, and the canopy cast a concealing shadow over the car itself. This motel had likely seen its fair share of illicit liaisons in its long history.

But something about the car seemed familiar. Seemed . . . He leaned forward, praying to holy hell that he wasn’t seeing what he thought he was seeing. A knot coiled in his stomach.

Sure enough, there, at the end of the building, sat a familiar, sturdy Subaru. The gouge across the back fender evidence of the driver’s poor backing skills.

“Sonofabitch.” Britt bolted from his truck, not even bothering to kill the engine.

Joan stood next to Bear in the ancient bathroom. The potent odor of bleach permeated the air and the circa 1970 porcelain sink gleamed. The place was old, but it was clean.

He slammed the lid down on the toilet, stepped up, and unlocked the half-window, poking his head out. His wide shoulders hugged the frame and Joan let out a sigh. How he intended to get through there was a mystery.

Apparently satisfied by what he saw outside, he faced her again. “All clear.”

He hopped off the toilet, sticking the landing with ease for a man in his seventies.

A panicked gurgle of laughter popped out. “I am not climbing out that window. I’ll break my neck!”

“Ha!” She pointed to the window. The very small window. “You barely got your head through there. How are you getting out?”

“I’ll manage. I’ll go first and grab you on the other side.”

“Or I could walk out the front door.”

This suggestion was met with a frigid blast of hard, blue eyes. “Joanie, don’t.”

And that’s all it took for Joan Steele to fall in line. There were times she thought this man nuts, stone-cold crazy. But other times? Like now. Knowing what he’d been through, the sacrifices he’d made, she understood. Literally felt his pain.

Still, she’d had enough. The sneaking around. The lying to her children. All of it. She wanted a life. A normal life that didn’t involve illicit secret meetings and hiding.

“We’ll talk about it later.”

He grabbed her by the cheeks, kissed her, and before she’d opened her eyes was back on top of the toilet, putting a leg through the window. Seconds later, he was gone. That fast, he’d slipped through.

“All clear, Joanie. Get in there, girl.”

She shook her head. Damned man, making it look so easy. If she got hurt, she’d have to explain this to those pain-in-the-rear boys of hers and she’d never hear the end of it. Worse, they’d probably hire bodyguards when all she wanted was to get a little love.

Lord! She stepped onto the toilet, blew out a hard breath, and eyeballed the window. Small. Definitely. Roughly four feet from the floor. It wouldn’t be impossible to work her way through there, but she’d have to be careful.

I can do this.

The window was awfully small, though. Using her hands, she measured the width of her hips, comparing it to that of the window. Not wide enough. No way.

She stuck her head out the window and the warm summer breeze tickled her cheeks. “You do realize my hips aren’t as lean as they used to be.”

She knew that. This man had always protected her. Always.

She shook her head, let out a little laugh. “Thank God my boys aren’t here to see this one.”

How hard could this be?

Feet first was definitely the way to go. She tossed her purse out and hooked her fingers around the frame before sticking one leg out.

Once again, he’d foiled her plan, but she supposed he knew more about evasion techniques than she ever would. “Oh. I thought . . . Never mind.”

She brought her leg back inside, worked her upper body through the window and boosted herself up, landing jackknifed with her torso on one side and her legs on the other. A second of adrenaline-induced panic gripped her and a squeak shot from her throat.

“Joanie, what the hell are you doing?”

Steadying herself with one hand against the building eliminated the teetering, but the blood rushing to her head made the pavement below swirl. “I have no idea what I’m doing. Aside from being about to break my neck.”

In an effort to move this operation along, she rocked her hips, wiggling forward like some sort of deranged caterpillar.

Bear let out a snort and she looked up at him, found his eyes plastered to her undulating hips.

He cocked an eyebrow. “Girl, when I get you alone.”

Now he wanted sex? Good luck, fella. “Knock it off and get me down from here before this gets any worse. For the love of God, help!”