Enjoy an Excerpt from For the Love of Santa 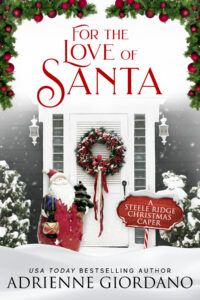 Roni halted on the walkway leading to the front porch of her rental home. Beside her, Way did the same.

What did he mean, who? For crying out loud, he’d helped her bring the damned thing home by muscling it into the back of his SUV. And, hello? Did he not see the empty space?

She held her hand out, palm up, jabbing it at the porch. “How do you not see this?”

He stared straight ahead and even in the dark with only the overhead light throwing shadows across his dark hair and sculpted face, she saw it. The cluelessness.

Unbelievable. She adored the male species—this one in particular—but the idiocy that sometimes overtook them was too much.

“Waylon! My Santa—the one that weighs nearly five thousand pounds and you complained endlessly about. The one we needed a hand truck to roll up the steps. He’s gone!”

She stormed up the four steps, her booted feet clomping against the freshly painted wood. At the top, she paused, glaring down at the empty space just beside the front door.

“Well, I didn’t move him. So unless you know something I don’t, clearly he’s been kidnapped.”

“Was he there when we left?”

She drew a hard breath through her nose, then exhaled slowly, summoning every ounce of patience. “Of course he was here. I’d have noticed.”

That Santa was everything great about this Christmas. To her, a woman who’d grown up in the foster system and spent the majority of her adult life avoiding emotional attachments, her Santa—that giant monstrosity of a statue—meant something.

Decorating for the holidays, deciding what she wanted where, porch lights, gifts under her tree, and…home.

A place of her own.

Despite the little bungalow being a rental, at first simply a place to land while she and Way grew into their relationship, she’d found comfort here. Not only the house, but in Steele Ridge where small-town life let her feel like she belonged. Like she’d connected.

More importantly, she’d found Way. And, hopefully, a family of her own.

Her Santa was proof of it. At nearly five feet tall, he stood on that porch announcing to anyone who passed that this tiny house with its even tinier porch was Roni’s home. Her safe place.

Now some son of a bitch had stolen him.

Well, they wouldn’t get away with it. She dug her cell from her purse.

“Maggie, of course. I want security video from every house on this block.” She lifted the phone to her ear and pointed at her doorbell with her free hand. “As soon as I hang up with her, we’ll look at my video. See who this bastard is. Then the neighbors. We’ll see who saw what.”

“Waylon, a crime has been committed.”

Being former FBI and CIA, not much shocked her anymore. She was, in fact, quite hardened to the realities of a sadistic world. But Steele Ridge had made her…soft.

Way, being a smart man, blew out a hard breath and accepted the fact that he, right now, should not speak. Particularly if he intended on not agreeing with her.

They’d just left her after the regular Kingston family dinner smackdown where they all brought a dish and voted on the winner.

Way had fallen short with his barbecued ribs, losing to a shifty Riley who’d gone with a white bean side dish, slow-cooked and laced with bacon.

When it came to bacon—and sugar—the Kingstons crumbled every time.

“My Santa is missing,” Roni said.

Maggie laughed. Just as her brother had done a minute ago. Seriously? What was it with these people?

She peered down at Santa’s vacant spot and a fresh bout of mad bubbled inside her. That gave way to…something. A burning itch on the underside of her skin that reminded her she should never, ever, get too settled.

Been there. Done that. And the only thing she found there was disappointment.

Still, she couldn’t give in to it. She was an adult now. A thirty-three-year-old, independent woman who took care of herself. Always.

“It’s not funny, Maggie. He’s…” She held her breath a second, fought the panic seizing her. “Gone,” she croaked.

Beside her Waylon touched her arm. “Hey. We’ll find him.”

She closed her eyes—damned tears—and nodded. She could do this. She’d just make a plan and hunt down the creep.

“So,” Maggie said, “someone actually stole that enormous Santa?”

“Yes. When we left for dinner, he was here.”

She knew that because every time she left the house, she ran her hand over him. Reassurance that life was, indeed, good.

“Did you check your surveillance?”

“Not yet. I called you first. Figured you could get your deputies over here while I’m checking footage.”

“All right. Blaine is working your area tonight. I’ll call him.”

Roni may have heard a dual sigh. One from Way. One from Maggie.

“Hey,” she said to Maggie while eyeballing Way, “he’s not easy to move. Someone had to have seen or heard something. So, yes, I’m canvassing. I’m out.”

She disconnected, then slipped her keys from her purse to unlock the door. “She’s sending Blaine over. We’ll all split up and start knocking on doors. While we’re waiting for him, we’ll check security video.”

“I don’t need to take a breath. I need to find my Santa. No one steals from me, Waylon. No one.”

“No buts. He’s mine and someone took him. That, I will not stand for.” She pushed the door open. “Let’s go.”

Wow. Way had always known Roni had a level of intensity that rivaled a firefight, but this? Over a holiday decoration?

But, he supposed, being a former psych trainer for the CIA had to make her a little bent from the get-go.

And what did that say about him since he loved the living hell out of her? Then again, what sane man could resist her? This one had it all. Brains, a lush little body, full breasts. Throw in her long wavy hair and…cooked.

She went back to her laptop just as a knock sounded on the front door. “It’s about time.” She set the laptop aside and hopped up from the sofa. “This has to be Blaine.”

Deputy Do-Right, as Way’s cousin Reid called him. Based on Roni’s current state, Do-Right better be prepped for the hurricane about to slam into him.

She swung the door open. “Blaine, hey, come in. We’ve got to get on this quick.”

Way met Blaine’s eye and raised his eyebrows in what he considered a solid warning. Man code for “hold on to your ass.”

“The sheriff said you’ve had a theft.”

She motioned Blaine to follow her back to the sofa. “I’ll show you.”

Outside, a Range Rover—Maggie’s most recent gift from her stud boyfriend—pulled to the curb before Way could shut the door.

“Maggie’s here,” he announced to the room at large.

Lord, his girl was losing it. But he wouldn’t be the one to inform his fiery-eyed beauty of that factoid. Not tonight anyway.

Maggie, still dressed in her jeans and sweater from dinner, strode up the stairs in her typical efficient, all-business manner.

He leaned in and lowered his voice. “Welcome to the madness. Brace yourself.”

“I heard that, Waylon,” Roni said. “Maggie! We have video, girlfriend!”

Before Maggie got any ideas about turning tail, he shut the door. “Don’t say I didn’t warn you.”

“Come see this.” Roni motioned her over. “Then, if you agree, we should all bang on doors. And, hey, thanks for coming over. I know you have to be dead tired.”

“No problem. I wanted to check on you.” She pointed to the laptop. “You recognize the suspect?”

“No. It’s two men, though.” She tapped the screen. “Look at this guy. He’s laughing so hard he stumbles.”

“They carry him off the porch to a pickup.”

“And the drunks are driving. Terrific. What time was this?”

Immediately, Blaine fired up his radio, putting out a BOLO for the pickup. All they needed was these dumbasses driving off the side of the mountain.

Or plowing into someone.

This was shaping up to be a long damned night.

Ten minutes later, before Maggie even shut the front door, Roni strode toward her. They had a Santa to find and time was slipping away.

Roni halted. Come on? Really? Not one neighbor saw anything? In this gossip-ridden town? She didn’t believe it. Not for a second.

“—to move and no one heard anything?” Roni poked her finger at the side wall. “Mrs. Epstein spies on my package deliveries. I wouldn’t be surprised if she keeps a log of what’s left on my porch. There’s no way she didn’t hear anything.”

Maggie held up a finger. “Slow down. They did hear something. They were getting ready for bed, heard a noise, and looked out.”

“At first, they couldn’t see anything. They were up in the bedroom, which is on the other side of the house. By the time she got to the front window—because after all, she had to put her robe on—she saw two men hopping into a pickup.”

Un-be-lievable. “And she didn’t call that in? The woman questions what color my day lilies are and she didn’t think two strange guys in a pickup—late at night, no less—should be reported?”

Maggie held her hands up. “Hey, don’t kill the messenger.”

“Fine. It’s good to know my neighbors are only interested in my packages. Not so much two guys robbing me. Excellent.” Roni spun away, headed back to her laptop. “I’ve been researching the truck. I only have a side view, but it might be a Chevy C10.”

She dropped back on the sofa where Way patiently waited.

“Mags,” he said, “the truck is old. Hard to tell what condition it’s in, but I’m guessing it’s an early eighties model.”

“It sure is,” Roni agreed. “I just sent the video to my buddy at Quantico. He owes me and might be able to get us a list of circa 1980 pickups in the area.”

Roni Fenwick, for all her faults, wasn’t a stupid woman. She wasn’t an FBI agent anymore, but she’d maintained relationships. One of which might help her get her damned Santa back.

Maggie checked her watch. “It’s late. Tomorrow, we’ll canvas the rest of the block, see who has cameras and might have gotten a better image of the truck. Ideally, a tag number.”

“Good luck with that.”

Roni shot him a look. “You never know.” She rose from her seat and followed Maggie to the door. “Thank you, Maggie.”

On impulse, she reached her arms out, wrapping Maggie in a hug. For years, Roni had avoided physical contact. Their friendship began when Roni had been handpicked by the Bureau to work a joint, multiagency cigarette smuggling task force Maggie created. A professional friendship had been formed and then, after the death of one of the task force members, they’d gotten closer. Something Roni, being the solitary type, had marveled over.

But even loners needed friends, and Maggie?

Beyond special. She’d become the trusted sister Roni never had.

Damn straight they would.