Enjoy an Excerpt from The Most Wonderful Gift of All 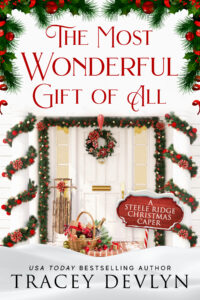 Today was a big day. She and several of the Steele and Kingston ladies were meeting at Blues, Brews, and Books this morning to assemble several dozen holiday-themed raffle baskets.

Last week, multiple wildfires had ravaged parts of Western North Carolina, leaving behind a swath of charred debris and homeless Carolinians. Along the northern border of Steele Ridge, the fires destroyed a multigenerational apple orchard, a tree nursery, and a small subdivision before moving on.

The families and businesses had lost everything—their homes, their possessions, their pets, their livelihoods, and their presents.

Heartbroken by their misfortune, Randi decided to organize a benefit to solicit donations of food, clothing, toys, furniture, and much-needed funds. The town’s residents responded exactly as she’d hoped, with enthusiasm and generosity.

Prying one eye open, she glanced at the bedside clock and groaned. It was worse than she thought. If she didn’t drag her bottom out of bed now, she’d be late.

She threw back the covers and the cool cabin air prickled her bare skin.

“Where do you think you’re going?” A strong arm curled around her waist, dragging her back into a warm haven of male temptation. Britt Steele’s muscled leg slid between hers, drawing her closer, flesh to warm flesh. He nuzzled the side of her neck and kissed the outer shell of her ear.

“I have something I want to share with you.”

Anticipation rippled down her spine, not stopping until it tingled her toes. Lifting her head, she peered at the one man who could make words dry up on her lips with nothing but a sexy glance in her direction. “You’re in a very sharing mood this morning.”

“A man can never”—he flexed his hips—“share too much with the woman he loves.”

She reached back and raked her nails over his bare leg. “A genuine open book, aren’t you?”

“To some.” His warm, calloused hand skimmed down her side “To you.”

“I don’t have time to play this morning. The girls will be at Triple B within the hour.”

“The event isn’t until this evening.”

In all other areas of her life, she took charge, made decisions, kept things moving. But with Britt, in moments like this, she succumbed. Without thought, without fear, without regret.

He drew her hand from where it clutched his leg and placed it on the rumpled sheets in front of her. “Hold on.”

Her nails dug into the fabric, anchoring her for the oncoming storm. “We’re prepping this morning.” The ladies had volunteered to give up their Saturday to help her prepare for the benefit tonight. She couldn’t leave them standing outside Triple B while she indulged in another bout of fun with her mountain man.

“Me too,” he murmured, nuzzling her shoulder.

“Sounds like I’ll have to skip a few preliminary steps.” His voice was thick with need and promise. “And get right to the good part.”

Breathing became irrelevant. All her aching body needed was him. Needed him to feed the desperate hunger that writhed inside her, that begged him to put words into action.

Then she splintered. Shattered into a million brilliant pieces of stardust. Britt soon followed, his exhausted body slumping against her.

The after-minute, when their breathing swayed together and their heated bodies melded into one harmonious being, was the moment she yearned for at odd times during the day. It was these sixty seconds when she felt wholly connected to another human being.

Loved. Protected. The one place where she belonged without condition or expectation.

It was pure joy.

As soon as the aftershocks subsided and her body ceased its trembling, Britt brushed his lips over her shoulder. A sweet ache spread through her muscles. Missing him already.

Stretching, she snaked a hand around the back of his neck, guiding him to her mouth for a long, luxurious kiss.

His hand skimmed over her ribcage before cupping the underside of her breast. And just like that, one touch from this man awakened her satiated body.

As always, their bodies spoke their own language, expressed their physical needs in nothing more than movement. He came over her, surrounded her in a cocoon of flesh and bone and home.

God, she loved the feel of him, the scent of him—she tangled her tongue with his—the taste of him.

“If we keep this up,” he whispered, “you won’t make it to your prep fest.”

Her eyes flared open to check the clock on the bedside table and she moaned at the amount of time that had slipped by. “I have to go.” Her tongue flicked against his upper lip. “To be continued.”

Peeling away from her, he sat back on his haunches and stared down at her exposed naked body with the hunger of a man who hadn’t experienced release in months, rather than minutes.

“Do you ache,” he pressed a curled knuckle between her legs, “here?”

A sharp breath hissed between her teeth, and she considered plunging into round two with him.

Groaning, she sat up, kissed the center of his chest, and left their warm bed.

He eased onto his back like a sultan sprawling against a mound of silken pillows. Knee raised. One arm braced behind his head, the other one resting on the rumpled sheets near his hip. Pure enticement.

She turned away before she changed her mind and stretched her arms over her head, enjoying the slow release of knots in her back and shoulders. Anxious energy began to flow through her veins as her mind picked through all the tasks that needed to be accomplished before nightfall.

“Your lower back could use a good stretching,” Britt coaxed. “Maybe you should touch your toes.”

She glanced over her bare shoulder to find his attention riveted on her bottom. “You know, I think you’re right.”

With the smoothness of a Cirque du Soleil performer, she bent forward until her fingertips grazed the wooden floor.

An animalistic growl preceded the savage flinging back of sheets.

A shriek escaped her throat before she bolted into the bathroom. She twisted the lock in place a whisper before he reached the door. Heart pounding, she stared at the golden oak stained panels waiting, anticipating . . .

A delicious roar of defeat thumped against the barrier, then silence settled in on the other side. Her pulse tripled its pace.

She closed her eyes. “Go away, Britt. I have to get ready.”

His promise sent a surge of heat between her legs. She reached for the door handle, wanting nothing more than to feel the burn of his mouth on her body. Every. Single. Inch.

Then the echo of Evie Steele’s sweet but commanding voice speared through the sensual fog enveloping her good sense.

Don’t let my brother keep you in bed all morning. We have a lot of baskets to assemble.

Randi smiled and kissed the door at the precise location where she knew his forehead would be resting. “After.”