Enjoy an Excerpt from Tasting FIRE 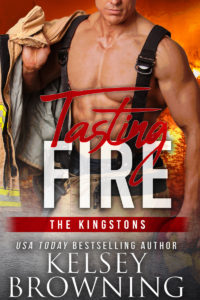 Emmy and Cash stopped in front of the Murchison Building, and she gestured up toward her apartment windows. “I want to be here. I love my hometown.”

“Which you showed so eloquently by leaving.”

“Yes, I had to leave to become a doctor, and I won’t apologize for building a successful career, but…”

“I wasn’t building a life I really wanted.”

“You are a piece of work. Never satisfied, are you? And now you think you can find the life you’re looking for here, in Steele Ridge?”

“Yes.” She risked putting her hand against his cheek, savored the prickly feel of short scruff. Her pulse sped up at the simple contact.

“At one time, I wanted to build a life with you,” he said, his voice edged with bitterness.

“We were young. Naive,” Emmy whispered. “But the last thing I wanted to do was hurt you.”

Cash took a step, moving closer until Emmy was forced to back up. The bricks of the Murchison building caught the fabric of her shirt, the rough texture at her back making her skin ripple. She lifted her hands to his chest, and her fingers curled into the softness of his T-shirt.

He leaned in, lowering his face until their lips were within breathing distance. “Pain is a helluva teacher. I’ve gotten some smarts since you left, Emmy. But apparently not enough, because I still want to kiss you.”

Standing right here on Main Street, Emmy had the impulse to loop her arms around Cash’s neck and jump into his arms. Squeeze her thighs around his waist and plaster her front to his. That was the kiss she wanted.

But that was too much, way too soon.

Still, she couldn’t resist touching him, so she lifted to her toes and pressed her mouth to his. Their long-overdue kiss was just a touch of lips. A sweet slow slide that was supposed to soothe away his anger. Instead, it yanked the very breath out of Emmy. Every millimeter of her skin was suddenly clamoring for his touch, simply because she was holding back the torrent of need inside her.

Then Cash skimmed the tip of his tongue along her bottom lip. Thank goodness the wall was at her back or her knees might’ve been in trouble.

She grasped for his waistband to steady herself and hooked two fingers inside, against his hot skin. But when she tugged, he didn’t budge, just slowly heated up the kiss, degree by degree.

Good Lord, he’d learned a thing or two since the last time they kissed. And he’d been a knock-her-socks-off kisser then.

When Cash finally opened his mouth over hers and took the kiss to tongues, hot breath, and heaving chests, Emmy’s brain stopped thinking and turned everything over to her body.

This. This was the passion and yearning and need that had been missing from her life. She’d been without it for so long that she hadn’t realized what she was missing until the night Oliver had executed his clinical proposal.

One hand in his waistband, she grabbed hold of Cash’s hair with the other and yanked. Oh, God. A brick wall at her back and a hard man at her front.

The perfect kind of trapped.

Cash obviously thought so too, because his erection was hot against her stomach even through the fabric of their clothes. Sure, they’d done it a few times when they were dating their senior year, but those had been quick, furtive encounters the few times they could find privacy.

Not easy in a small town.

Once down at Deadman’s Creek in the front seat of the truck he’d driven back then.

Once on her couch when her mom had taken Kris to see a play in Asheville.

They’d had plans, though, for sharing an apartment one day. Sleeping and loving together in their own bed. But she’d rejected all that.

Cash’s hands came up and framed her hips, pulling her up the wall and tilting her pelvis against his. It made Emmy want to claw at him, tear at their clothes until they were skin to skin and he could slide inside her. Fill up the places she’d recently discovered were so empty.

She even went so far as to flip open the top button of his jeans, but before she could shove her hand fully inside his pants, something whooshed past them and crashed through one of the Murchison building’s front windows.