Enjoy an Excerpt from Vowing LOVE 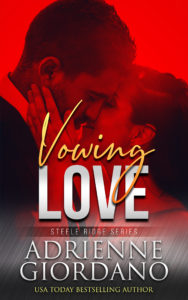 “Reid Sullivan Steele, I should box your ears.”

Someone poked Reid. Square in the ribs.

Had to be his mother with that whole full name crap. But why was she in his bedroom?

He kept his eyes closed while his senses scraped their way to life. Something hard was under his cheek. And what was that pressing against his thigh? Damned sure not his Brynnie. She was all soft curves and lush skin.

His head. Sweet baby Jesus.It felt like a battering ram test dummy. The nudge came again, way harder this time, as did the test dummy feeling.

“Reid! Wake up this instant.”

Jeez, the noise. Did she have to yell? “Ma, stop. No school today.”

He peeled his right eye open, spotted a pair of khakis, his mother’s black Chuck Taylor’s, and the blinding sun piercing through the window. Somehow he’d wound up on the floor. Good God.He closed his eyes again.

“School? Are you high? You know I don’t allow that nonsense.”

The way his head pounded, he wishedhe was. “Mom, please, stop yelling.”

“Ha! I haven’t even started yet. You should be ashamed of yourself. You’re a mess. A total embarrassment on your wedding day.”

His mind looped back a few hours. The guys from his Army unit showing up. The impromptu bachelor party after the rehearsal dinner.

He swung his head up, his stomach flipped, and he immediately regretted being born. Lord, he was a lightweight these days. Laying back down, he let the cool wood soak through his cheek. Hangover of all hangovers.

On his wedding day.

Brynne would castrate him.

“Get up,” his mother said. “It’s nine-fifteen. We’ve got to get this house organized. Your father is at breakfast with the Blackwells. They’ll be here eventually, and I can’t have you and your friends passed out in my living room like a bunch of lowlifes. I want this place spotless. All I need is them snickering. I swear, Cameron is the only decent one. At least he’s made something of himself. Hewouldn’t be in this condition on his wedding day.”

Cam also wouldn’t be marrying a girl like Brynne because she wouldn’t be caught dead with his Blackwell cousins.

Saying that would only piss his mother off more, so he’d shut his trap and deal with the guilt trip. By now, he should be immune. When it came to him, she often used a certain tone that made clear her dissatisfaction with his running mouth as well as his never-ending and—admittedly—sometimes oddball opinions. Then, of course, the greatest of all offenses, his tendency to swear. Hey, if she spent time with a bunch of Green Berets, she’d be dropping “motherfuckers” like a champ too.

She loved him though. Without question. He might, in fact, be her favorite. At least he liked to believe that.

Except today. Today she wanted to skin him.

Slowly, he opened his eyes again, blinking everything into focus. His stomach pitched. He might blow chunks. Right on his mother. He inhaled and willed his rebelling stomach to not turn pansy on him.

The sound of the front door slamming accosted him. Were these people trying to kill him? “Could we knock it off with the noise?”

“Noise?” Mom asked. “Honey, this is nothing. Now get your rear off my floor.”

Grif’s voice. Excellent. As usual, not a break to be had. On all of God’s green earth, there was nothing his brother loved more than riding his ass. Hard.

Shifting his gaze up to his mother, who poked her finger at Grif. “What’s going on is that you’d better fix this. He needs to be dressed and looking rested in less than fivehours. I will not have my son resembling trash.” She leaned down and aimed at Reid next. “I love you, though I could throttle you in this moment.”

Her legs moved and then she was gone. Thank you.

“Grif.” Her voice carried as she left. “I’m serious. I want him cleaned up. You boys are determined to put me in an early grave.”

“Grif,” Reid said, “if you don’t shut the fuck up, I’m gonna tie you to my bumper and drag your ass over gravel.”

“Oh, nowI’m scared. How many times have you threatened me with that? And, hello, I’m not the asshole who got completely wasted the night before marrying possibly the sweetest girl—aside from my wife—alive. What the fuck is wrong with you? I became a minister for this?”